“No Religion” is the third largest religious group following Christians and Muslims.

The “unaffiliated category” covers all those who profess no religion, from atheists and agnostics to people with spiritual beliefs but no link to any established faith.

Hypocrisy is keeping a lot of people away from the Christian church for a myriad of reasons.  I am in no way an expert and due to chemotherapy I have a terrible memory, having memorized scripture as a child, I cannot bring one to memory.  I’m not the person to have a conversation with regarding the history of Christianity, which IS one of the reasons many turn away.

But hypocrisy seems to be a big player in these decisions to not follow a particular faith.

Believing one thing, acting like or saying something different.  Or vice versa.

Part of my spiritual journey was learning whether or  not I could stand on the foundation of my faith.  Did I believe what I felt and said I believed?  It turns out I do, and I do.

Having been through ovarian cancer, a gigantic tumor removed and chemotherapy received; I feel I have been healed by faith.  I love this little sentence so much, I’m having it tattooed on my wrist.

Granted, there are a lot of reasons for not being involved in a church; but my advice to you — is keep going, trying new faiths, churches, go with a friend, etc.  I was baptized and confirmed a Lutheran.  I’m now an Episcopalian with ties to the Catholic church and socialization with my UU’er friends (Unitarian Universalist).

For me, I need to be spiritually fed, believe in my spiritual leaders and advisers, feel I could bring ANY friend of mine to the church and learn more about the magnificence of God! 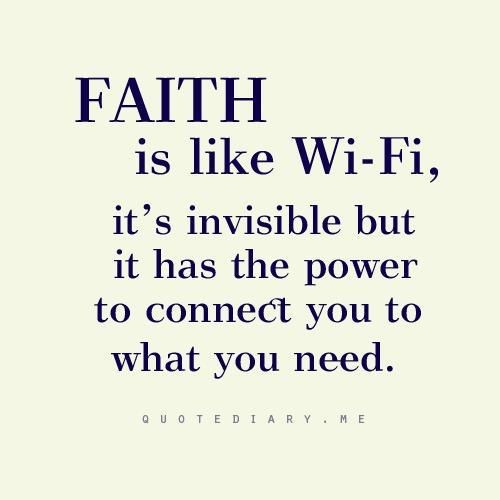